Here is the main character in the current story. 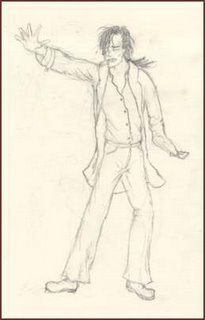 His name is Rook, and no, he's not singing. He's a storyteller, and he's just gotten to the dramatic climax. This picture is actually a mirror image: it's his right arm that's withered. Why? Ho-ho-ho, I'm not telling.
Posted by Brian Wightman at 4:26 PM No comments:

My writing lately has included a lot of graphically-oriented stuff. I wrote a children's book, that I trying to persuade artist DoAn to illustrate. It's a brief, Seussian take on the planets, and the scientific method, and about openess to questioning. Most lately I've been working on a graphic novel, properly known as an OEM, or "Original-English Manga." "Manga," for the uninitiated, is Japanese for "magazine," and refers to the peculiar Japanese style of graphic novel. Manga are so popular in translation that some publishers have started releasing manga-style graphic novels by English-speaking writers and artists. Am I going to illustrate it? Probably not. I'd love to, but it would take too long to really learn how to do it right.

I have also adopted a new visual style of outlining, which involves drawing quick little stick-figure sketches that summarize scenes. It represents happenings much more effectively and succinctly than writing, and the resulting strip-story can be "read" and absorbed very quickly.

I have some pictures, which I will try to post here, as I can.
Posted by Brian Wightman at 3:20 PM No comments: