Keeping the whole story in front of you

For a long time I've had a challenge being able to see the whole story at once, and think about it as a whole, rather than sequentially. This is my latest effort: iconic cartooning. The idea is a simple cartoon that captures the essence of a scene or event. No words are allowed. It is made with symbols of import to the author, with little need for representation.

The clip shown at left is from an early chapter in this story. I apologize for the poor rendering. It covers the journey to the colony ark, and some first events. In the top square, we see a figure with a star on the back of his head and another with flyaway hair. These symbolize Jonah and Mischief, respectively. Mischief is smiling animatedly, Jonah looking away. Heat waves off his head mean he is angry, she irritates him with her cheeriness.

In the second frame are three characters, Mischief with her flyaway hair, then another with curly hair (Avery) and one with dark glasses and a badge (security officer). The security officer strikes Avery with a stun wand that shocks him.

These two little squares describe a scene in which Mischief meets Jonah on the shuttle, and he is rude and spurns her. She moves to sit next to Avery, who is suddenly set upon by security, stunned, and removed from the shuttle, not to be seen again.

The remaining three frames show Mischief trying to make up again with Jonah in the cafeteria, and then Mischief asking the chaplain for news of Avery, where the chaplain warns her that security is watching.

The advantage of the visual format is I don't have to read it, I just have to see it. Moreover, I don't have to think up the right words. I just draw the Mischief icon with a goofy smile and her hand up and I have the feeling of what she is saying without writing it. Seems to be working.
Posted by Brian Wightman at 5:21 PM No comments:

Okay, here's the protagonist of the latest story. On the right in the cargo pants, name of Mischief. The guy she's messing with, in the tweed, is an older botanist she has a brief fling with. 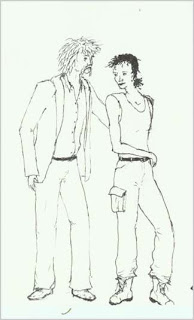 And here's where they're going: 44 Bootis A, just off the constellation Bootes, 40 lightyears away. Read about it at Solstation (http://solstation.com/stars2/44bootis.htm). But don't tell Mischief, she doesn't know, yet.

Posted by Brian Wightman at 8:09 PM No comments:

Yes, July has come and gone, and I am writing!

After a couple of starts, it seems I am working on a novel about a group that goes to colonize a new world. I started it while I was in school, basically dictating it on my commute and having the computer type it up for me. I've got bunches of pictures for it, I'll see if I can't post something. At any rate, I'm probably about a third of the way into it, having drafted part one, although it is without a title. It's good to be writing fiction again.
Posted by Brian Wightman at 4:37 PM No comments:

For those looking for story news, check back in July. That's when I'll be done with my Master's Thesis and writing fiction again.
Posted by Brian Wightman at 7:25 PM No comments:

By the way, if I ever do publish a manga (Japanese-style graphic novel), here's how I'd have to sign my name:

The first character means "evening." The second is "person." It would be written in English as "Yuujin," and pronounced, of course, just like "Eugene." Japanese names aren't the standard in Original English Manga, but the coincidence of this is just too tempting.
Posted by Brian Wightman at 7:59 AM No comments:

I read in Locus Magazine that the venerable Jack Williamson just passed, at the respectable age of 98. I met Jack Williamson when he won the Lifetime Acheivement award from the Ron Hubbard people, the same time I was winning the Writers of the Future Award. He was 90, a little old man hunched and bent over.

For those who don't know, Jack Williamson is one of the grandfathers of Science Fiction. He stands among Robert Heinlein and Isaac Asimov and others who did not approach the end of the millenium. When he started writing, the term "Science Fiction" hadn't been invented yet, and he and his colleagues spoke of their work as "scientifiction." He published his first story in 1928 at the age of 20. At the age of 75, long past most would have retired, he began a second peak of his career, writing his best work since the 1950s. He published his last story in 2005, at the age of 97.

I confess, with some embarrassment, that I haven't actually read any of his work. I brought one of his novels with me to California, with the intention of being familiar with his work before I met him, but their were several such writers and I didn't get to his. Perhaps for this reason, I spoke only seven words to him. "It's an honor to meet you, sir." I don't remember his exact reply. He tried to say something like "the honor is all mine," except he didn't know who I was so it was hard to say.

He stands in my mind as an icon. He was born in 1908, in the territory of Arizona. Yes, there weren't even 48 states, then. At the age of 10, he and his family moved to New Mexico in a covered wagon. He wrote science fiction before it had been invented, and he wrote it after the usual complainers said that its hey-day was passed. He wrote it after maybe all of his peers were dead and buried, and he died with his pen in his hand.

A lot of history has passed away with him. I didn't know him. But I took comfort knowing he was still there.
Posted by Brian Wightman at 10:18 PM No comments: