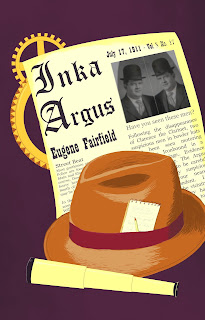 I first realized something was wrong when I didn't hear a clarinet. I know, most of the time, not hearing a clarinet is not a cause for concern, especially if you live in the Old City. Wagon wheels, trolleys, factories, shopkeepers shouting their wares, beggars shouting at shoppers, policemen shouting at beggars. There's always a lot of noise, and most of the time, none of it is a clarinet. But I was on Stuffschert Boulevard, at four in the afternoon, just past the west side of the Downtown Crossing station, and at that particular place at that particular time, there was always a clarinet playing.

I looked both ways up the street. I even went down into the underground station, and checked both corners of both platforms. I got ugly looks from the stationmaster, who thought I was trying to jump the gate for a free ride, but I didn't find a clarinet player.

His name was Clarence. I never knew his last name. He was short—almost as short as me, which is short for a thirteen year-old girl. He always wore the same too-large twill pants held up with suspenders, and a flat cap on his greasy curls. He was half blind, and half deaf, and every day, from seven in the morning until seven at night, he stood on that street corner and played for all he was worth.

I once wondered why the police didn't call him a nuisance and drag him away. He only knew about half a dozen songs—"The Bugle Call Rag," "St. Louis Blues," "In the Mood," and "The Saints Go Marching In"—which he played in continuous cycle, all day, every day. So, of course, I looked into it. Apparently, this was tried, some ten years ago, before I was really interested in anything other than lunch and thumb sucking. Seven times they locked him up, once for thirty days hard labor. The moment they let him go, back on the street he went.

If it were hot like today, he would open his shirt and roll up his sleeves. If it were icy cold and snowing, he would wear a scarf and a worn-out coat with only one button. If it were raining, he would wear a plaited reed mat tied on his head, sticking out more than a foot in front to make a little roof for his instrument. Two summers ago, when the hurricane hit, the police had to lock him up to keep him off the street. Last winter, in the Valentine's Day Blizzard, a local parson just about dug him out of the snow and dragged him to the parsonage. There are only three things you can count on in this world: death, taxes, and Clarence.

A tall bearded man, wanting to be elected, or wanting to say something to those that were, was standing on a soap box and shouting about letting women vote or banning alcohol or passing a law against the 72-hour work week or all at once. Gentlemen and clerks tried not to look at him, or at the beggars who dogged their steps, and the beggars tried not to look at the police who eyeballed them.

Then I saw someone I knew, an old panhandler called Robin, who was carrying a box and a fiddle in a sack. He stopped, right in the center of the street where Clarence would have played, and put his box down. He was wearing two pairs of shoes, which would have been odd enough by itself, but the second pair was wrapped around his knees.

"Robin." I approached him. "What are you doing?"

He grinned at me, showing his remaining teeth, which were mostly on the left side of his face, owing, he said, to an angry cannibal with a large stick. The story of how he avoided getting eaten, if a cannibal had knocked his teeth out, was long and varied, and never made much sense, however he told it. There are three kinds of people on the street: my people (the ones I can talk to, and trust most of the time), the Other People (who I'll talk to, but only a fool would trust), and the Wrong People (who I don't talk to, and don't ever let find me alone). Robin was one of the second group.

"Watch," he said. He opened the back of his box, which I now saw had two holes cut in the top. He stepped into these holes, and closed the back behind him, so it looked like the shoes on his knees were standing on the box. "Pretty good, eh?"

"Are you supposed to be a dwarf?" I asked. "You don't look anything like one. Your arms are too long."

"Nay, then," he said, affecting an accent I couldn't quite place. "I'm an old sailor-man, a vet'rin of the navy, see? I was cursed by a witch docker on the Ivory Coast, weren't I? Took me legs off, and put me feet back where me knees should be."

"Zac'ly. Was there ever a more pitiable sight, than a vet'rin, misshapen by 'is service to 'is country?"

"Now don't you go writin' 'bout this in that rag o' yours, this 'ere idea is my inter-leck-chool property, see? I'm not givin' it away for less than five dollars." He took the fiddle and bow out of his sack and let the sack fall to the ground.

I tried not to laugh. "Don't worry, I won't write it up. But Robin, why are you setting up here? This is Clarence's corner."

Technically, Robin was in the right, there. But I doubted most folk would pounce on Clarence's corner the moment he disappeared, and Robin's ridiculous accent was irritating me.

"Well, you let him have it when he comes back," I said.

"Beat it," Robin said, which I should have expected.

I gave up on him, and looked up and down the street again. There was no sign of Clarence, but I did see a cabby I knew. He was the driver of the cab that had taken me from the orphanage when I was nine, a middle-aged African man who has always recognized me ever since. To me, he couldn't have seemed more wonderful if he had wings and drove a golden chariot. He was the man who took my little hand in his gloved hand like I was a lady, and carried me away. I will always remember him. Even if he didn't have a mechanical left arm, mostly hidden inside his sleeve, except for the hum and whir it made when he moved it, and of course the wire that came out from under his jacket to the battery he carried slung over one shoulder. To him, though, I should have been just another fare. Yet he never forgot me.

He smiled at me brightly. "Miss Inka."

"Mr. Alemu, have you seen Clarence?"

He shook his head sadly. "No, miss, he has not been here for three days. Only the fiddle man."

I wanted to ask him where Clarence could have gone, but there was no reason he'd know. It was just strange. "When you saw him last, did he look sick?"

"Ah, miss, it is hard for me to say. Mr. Clarence has always looked sick to me. If I see him, shall I tell him that miss is looking for him?"

"Hey, charcoal!" the driver of the next cab in line called. "Are you going to take this fare or should I?"

A pair of rakish-looking men wearing pork pie hats with bright hat bands and no waistcoats were watching us, hips thrown out and lopsided grins on their faces.

"Go on," I whispered to Mr. Alemu. He took my hand in his and kissed it quickly. I could feel the metal fingers through the glove, but the touch was soft and gentle.

I strolled away, passing the next cabby on the far side of his horse. He was a round little man with hair so blond he hardly had any eyebrows.

I waited until two very fine gentlemen were headed his way, then I shouted at him. "You watch your mouth! Tub o' lard!"

"Eh? Come here, you!" He started to come after me, but his horse was in the way, and before he could get around he noticed his fare.

I skipped off a few yards while he tipped his hat to the gentlemen. Then I took a straw out of an inside pocket on my vest, and blew an orange pip at his horse's end just as he was reaching for the cab door. The horse nickered and started off down the cobbles without him. I ran the opposite way. I don't like it when people insult my friends.

One of the curious things about life is how hard it is to tell when what you're doing is going to matter. I'd created an enemy in a big fat cabby, but I've never seen him since. On the other hand, just looking for a homeless guy no one cared about got people killed.

>>The full story is on Amazon, in paperback and ebook.>>

Posted by Brian Wightman at 4:49 PM No comments: